So, a while back (several months ago) I updated this application, and it broke. I tried reinstalling several times, installing the old version, etc., and nothing appeared to work. I removed all the jobs, and directories, and removed all references in the registry, and still nothing.

I lost track of this issue, and that was stupid, because if things go sideways, I’ll be in serious hot water.

SqlBak.Job.Cli fails for this, and so does SBF.Migration (just ran both for fun).

Here’s what I’m seeing in the logs (multiple errors):
Error 1:

I gave up on this out of frustration, and had other things to do, but I seriously need to get this back up and running! Help!

I should note that I have just installed .NET 4.8, with no change.

I switched platforms for backups, so no worries…

Thank you for your reply.

I have the same issue as described here. Started happening back in June. What should I do?

If you have any other questions, please let us know.

I’m having the same issue.

Could you please let us know, have you tried the recommendations from our previous reply?

Thank you and sorry for the inconvenience.

Hi @Alexander,
The only antivirus running is Windows Defender. I disabled it and still had the same result. Also, I tried using the old .NET 4.0 assembly build v11.3 and it also produced the same issue.

Thank you for your reply.

Sorry, but that is all the recommendations we can provide you with. For further investigation can we set a TeamViewer session?

Hi Alex,
After meeting last week with Alexey we identified the problem is having the environment variable COR_ENABLE_PROFILING set to 1. This is required for me to use an APM tool.

Is there a way a fix can be implemented that disables this flag specifically for SQLBackupAndFTP?

I really want to be able to use this alongside an APM solution (for other applications on the same system). I look forward to hearing from you soon.
Thanks,
Shawn

We have added some changes to the Alpha edition http://sqlbackupandftp.com/download/alpha that should resolve the issue. Could you please install it and check if it works for you?

Hi Alex,
After downloading the alpha build, I now see this error when I try to run one of the backup jobs. I also tried with multiple jobs to ensure it wasn’t an issue with one specifically. 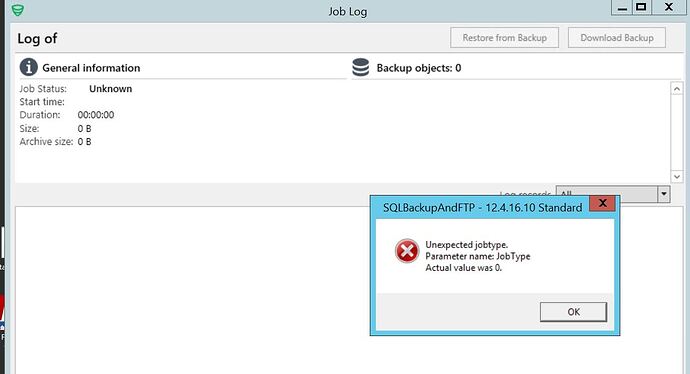 We have released the Alpha edition version 12.4.16.12 http://sqlbackupandftp.com/download/alpha. Could you please try to install it and if you still have the issue, please send us your Advanced Log. Here are more details on how to do it How to send Log to developers | SQLBackupAndFTP's blog

Please let us know when the log will be sent, also, please provide us with your application ID (“Help” > “About”).

Hi @Alexander ,
I’ve sent the logs to your development team. Please respond asap, once they’ve been able to review it. I’m getting a number of different odd errors that throw pop up messages.
Can send screenshots if needed.
Thanks!
Shawn

Thank you for the details.

To identify your log we need to know your Application Id. Could you please provide us with it (“Help” > “About”)?

Yes, if it is possible, please add the screenshots.

Also, could you please make sure that you tested the latest Alpha edition http://sqlbackupandftp.com/download/alpha - version 12.4.16.12

This same error started after installing Stackify Retrace - so yes it is related to profiling.

That’s great! Thank you for the confirmation.